At some point, many of us realize that our enjoyment of a movie is relative to our expectations. Years of being disappointed by the films we were most excited to see have even taught some of us to modulate our expectations in advance as a defense mechanism. I’ve never been a Superman buff, but I knew that the newest telling of this story, Man of Steel, comes from Christopher Nolan and Zack Snyder, the filmmakers behind Inception and Sucker Punch, respectively, so I went in primed for a mess of needlessly convoluted, sometimes self-contradictory mythology. (I know you loved Inception, but that plot had more holes in it than Oscar Pistorius’s bathroom door). What I wasn’t prepared for was the kind of lazy storytelling that is sadly becoming the rule rather than the exception in modern science fiction.

The movie opens well enough (though not everyone in my viewing party agreed) with a lengthy sequence involving the destruction of Krypton. My first thought upon seeing Rusell Crowe and Michael Shannon run around doing space-battle in foam-rubber armor was that this is a completely ridiculous movie that would never have been made if it hadn’t already existed as a comic book. But that’s a bit like saying if chocolate syrup tasted like mustard we wouldn’t put it on our ice cream; the whole point of making a Superman movie is to play to our preexisting familiarity with the story. This works to the filmmakers’ advantage as well as their detriment. One of the difficulties in adapting source material that has been adapted so many times (really, so many times) is the expectation of novelty, but not too much novelty. It’s a balancing act, and it’s the reason I enjoyed the Krypton scenes. Leaning heavily on Snyder’s sense of visual flair (his films may be incoherent messes, but they are gorgeous incoherent messes) the movie managed to make me forget that for the first 31 years of my life, the destruction of Krypton looked like this: 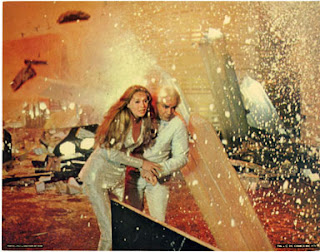 Credit also goes to Russell Crowe for stepping into Brando’s shoes (and the rest of the cast, who are very good in general.) There are a few unfortunate visual choices here (notably prison pods that look like flying butt plugs) but for the most part Krypton blows up real good.

From there we cut to the movie you saw in the trailers (and if you’ve seen the trailers, you’ve basically seen the next third of the movie). Taking a page from the Wolverine playbook, little Kal-El has grown into a moody, indestructible ice road trucker who gets into bar fights and hitchhikes in the snow. I believe Hugh Jackman’s chest was actually on loan for the filming of these scenes. This is the highlight of the film for me. The least appealing part of the Superman mythos has always been his bland perfection, and it is nice to see Superman struggle with something that can’t be outrun or leapt over. Intercut with these scenes are snippets from Superman’s childhood in Smallville, which are sweet and sun-dappled and my first point of contention with the film.

As touching as the Kent family scenes are, they are also pandering and outdated. I understand that Superman needs to grow up on a farm (or in this case, a “farm,” since these scenes are set in the kind of stock footage visual shorthand for rural America that looks more like a Sarah Palin campaign ad than anything resembling an actual modern farm, even one in the 1980’s) but if you decide to set your Superman reboot in 2013, you need to commit to that decision. Magneto needs to spend his childhood in Auschwitz, so X-Men: First Class takes place in the 1960’s. If Clark Kent needs to grow up on a 1940’s farm, set your movie in the 70’s. Or, reevaluate the farm idea, which you are allowed to do (it is a reboot, after all). I wouldn’t have as much of a problem with this incongruity if it weren’t for the inclusion of the line, “I grew up in Kansas, that’s about as American as it gets” toward the end of the film. Less than 1% of the US population lives in Kansas, so no, living there is not a characteristically American thing to do. Only 15% of the population even live in rural areas. If I were a filmmaker trying desperately to deliver a modern take on an American myth, I would start there.

Instead, the writers have chosen to “update” the story by going full-on Damon Lindelof on us, bombarding the narrative with nonsensical obstacles and then just sort of shrugging and saying, “Science?” whenever an explanation is needed.

(Spoilers from here on out…)

Let’s start with Superman’s powers. Although the specifics have changed a bit over the years, the most widely accepted explanation for Superman’s powers has been that Krypton orbits a red sun, while Earth orbits a yellow sun. It’s not great, but we’ve bought into it long enough that our collective disbelief has been permanently suspended. The red sun hypothesis is apparently not good enough for Christopher Nolan, though, who has to add in the idea of atmospheric nutrients (“Science?”) without getting rid of the sun stuff.

This leads to a number of narrative inconsistencies once General Zod shows up and the action is moved through settings with different atmospheric conditions. Superman is powerless aboard Zod’s ship (Kryptonian atmosphere) while Zod is powerless on Earth. Okay. But. Zod and his crew also have masks that allow them to breathe on Earth. Also fine, I suppose, except that the masks don’t change the nature of the sun, yet they do seem to instantly give Zod and his crew Superman-like abilities, which are supposedly the result of years of exposure to that sun. If Superman’s powers come from the atmosphere, why include the sun at all? If they come from exposure to the sun, or a combination of the sun and the atmosphere, then Zod’s breathing mask should not give him those same abilities.

However, the masks are a minor issue compared to the specifics of Zod’s plan, which is to use a gravity ray to increase the mass of the earth (“Science?”) and establish those all-important atmospheric nutrients so that Krypton can be rebuilt there. This unfortunately requires the destruction of mankind, as well as a sample of Kal-El’s DNA (which holds all of the genetic information for every Kryptonian ever). When offered a deal of peaceful cohabitation (you know, not destroying everyone on Earth) Zod refuses on the grounds that it would mean years of painful adaptation to Earth’s atmosphere. But why is Zod so intent on Earth in the first place? By his own admission, it’s not a planet readily habitable, and even if he did terraform it completely, it would still be orbiting a yellow sun (which everyone, including the filmmakers, have just forgotten about at this point). Also, he mentions “thousands” of colonies that Krypton had established on other worlds, which were presumably more habitable than Earth. He has even visited some of them in his search for Kal-El. Why not go back to one of those places? I’m sure that Superman would give him a blood sample if he promised not to rebuild his civilization on the ashes of the place where Clark Kent keeps all his stuff. Third, Zod and his crew all seem to go through this supposedly years-long process of adaptation within a few hours of losing their breathing masks. Seriously, by the end of the movie, they are all Superman. If their plan succeeds, though, they will lose these powers.

Which brings me to my biggest sticking point: laser beam eyes. True, they may not be the most important of Superman’s powers, but they are representative of how little thought was put into the internal logic of this film. Laser beam eyes basically mean that if you can see something, you can kill it, and Superman has them. Yet there are several times when Superman looks at Zod – looks at him right in his unprotected face with the very same eyes that are also laser beam eyes – for extended periods of time, trying to figure out a way to stop him. When Zod develops laser beam eyes of his own a few hours later, he uses them to try to kill a family cowering in a bank vault. In a scene that is emblematic of all of the problems I had with this film, Superman rushes in and grabs Zod by the head. The laser beam moves slowly across the room, inching closer and closer to the huddled family like something out of a James Bond parody, as Zod struggles to free his head from Superman’s grasp. At no point does it occur to Superman, Zod, or the lazy, lazy writers that he could just look to the side.
Posted by John at 2:40 PM 5 comments: